Back to the attractions page 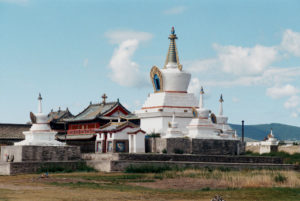 Erdenezuu monastery was built in 1585 by order of Abtai Sain Khan, a ruler of the Khalkha Mongols and grandfather of Zanabazar, the first Jebtsundamba Khutuktu, after his meeting with the 3rd Dalai Lama and the declaration of Tibetan Buddhism as the state religion of Mongolia.   Stones from the nearby ruins of the ancient Mongol capital of Kharakorum were used in its construction.   Planners attempted to create a surrounding wall that resembled a Tibetan Buddhist rosary featuring 108 stupas (108 being a sacred number in Buddhism), but this objective was probably never achieved.  The monastery’s temple walls were painted, and the Chinese-style roof covered with green tiles.

The monastery was damaged in 1688 during one of the many wars between Dzungars and Khalkha Mongols. Locals dismantled the wooden fortifications of the abandoned monastery.  It was rebuilt in the 18th century and by 1872 had a full 62 temples and housed up to 1000 monks.

According to tradition, in 1745 a local Buddhist disciple named Bunia made several unsuccessful attempts to fly with a device he invented similar to parachute.

In 1939 the Communist leader Choibalsan Khorloo ordered the monastery destroyed, as part of a purge that obliterated hundreds of monasteries in Mongolia and killed over ten thousand monks.   Three small temples and the external wall with the stupas survived the initial onslaught and by 1944 Joseph Stalin pressured Choibalsan to maintain the monastery (along with Gandantegchilen Monastery in Ulaanbaatar) as a showpiece for international visitors, such as U.S. Vice President Henry Wallace, to prove that the communist regime allowed freedom of religion.   In 1947 the temples were converted into museums and for the four decades that followed Gandantechlen Khiid Monastery became Mongolia’s only functioning monastery.

After the fall of Communism in Mongolia in 1990, the monastery was turned over to the lamas and Erdene Zuu again became a place of worship. Today Erdene Zuu remains an active Buddhist monastery as well as a museum that is open to tourists.

Source of text is from en.wikipedia.org

If you’re interested in visiting Erdenezuu monastery then look at our Tour page.